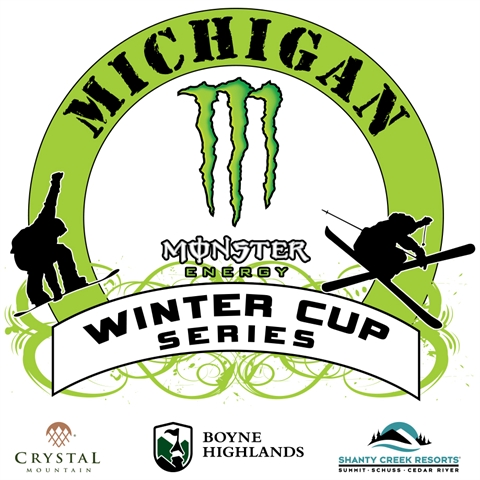 Posted at 17:47h in Uncategorized by Kurt AGA Nation
Share

Crystal Mountain hosts the successful opening round of the Michigan Monster Energy Winter Cup Series, now it’s off to Boyne Highlands, Feb. 9th, for round two of the Midwest’s premier freeski/snowboard competition series

Rewind … Round one of the inaugural Michigan Monster Energy Winter Cup Series took place recently at Crystal Mountain in Thompsonville, Mich. More than 50 of the Midwest’s top freeskiers and snowboarders took to the terrain park at Crystal, blasting, spinning, grinding and – in many cases – stomping the landings on a bevy of modern tricks. The big winners at Crystal were Kenny Simmons in the 18+over Snowboarder class and Reese Spaulding in the 18+over Skier class, along with U-17 winners Seth Harding (Snowboarder) and Flick Mooradian (Skier). The top female snowboarders were Kaitlyn Adams (U-17) and Meghan Boland (18+).

“The top riders really stepped it up using the entire course throwing big tricks with front and backside rodeos, switch backside rotations, and some huge frontside spins. On the rails were multiple lip and boardslides with some technical 270 spins, both on and off the features.” – Carter Backie, Head Judge of the Michigan Monster Energy Winter Cup Series.

At Boyne Highlands everyone in attendance will be able to check out some of the Monster Energy drink flavors at two separate sampling locations, hosted by the awe-inspiring Monster Energy Girls. Get yourself hooked up with some free Monster Energy swag this weekend at the Highlands!

·       Competitor Practice: Challenger Terrain Park open to competitors only for practice from 5:00 – 5:45 pm

·       Monster Energy After-Party: Immediately following awards in the Tailgate/Fireplace Rooms.  $5 to get in includes 2 drink tickets (each ticket is good for beer, wine, well mixed drink or soft drink), tons of appetizers, complementary Monster Energy product and an appearance by the Monster Girls!

For more information, including registration for the Michigan Monster Energy Winter Cup Series, link to: www.aganation.com